In April 2016, Authorised Installers from Concrete Repairs Ltd. invited the Triflex Technical Team to Downsgate Reservoir in Dover, to provide a project specification for one of their many drinking water reservoir roofs.

The existing roof consisted of a dense concrete screed and mortar, with a polyurethane waterproofing membrane which had evidentially failed. The waterproofing layer had developed blisters and cracks, which if left untreated could cause structural damage to the concrete roof.

Typically, Triflex systems are fully compatible with other cold liquid waterproofing chemistries and thousands of other substrates, often requiring little to no pre-treatments when directly overlaying. However, in this instance the polyurethane system had degraded to the point where a reliable bond couldn’t be guaranteed to the substrate, and needed to be removed to provide a substantial bond.

The removal of the membrane revealed small cracks and voids in the concrete which needed repairing before installation could commence. Triflex Cryl Paste and Cryl Paste Mortar, were specified to carry out the repairs. Triflex Cry Paste Mortar differentiates from the usual Cryl Paste as it contains aggregate, allowing larger voids to be filled and levelled and works to be completed with a smooth, seamless finish. 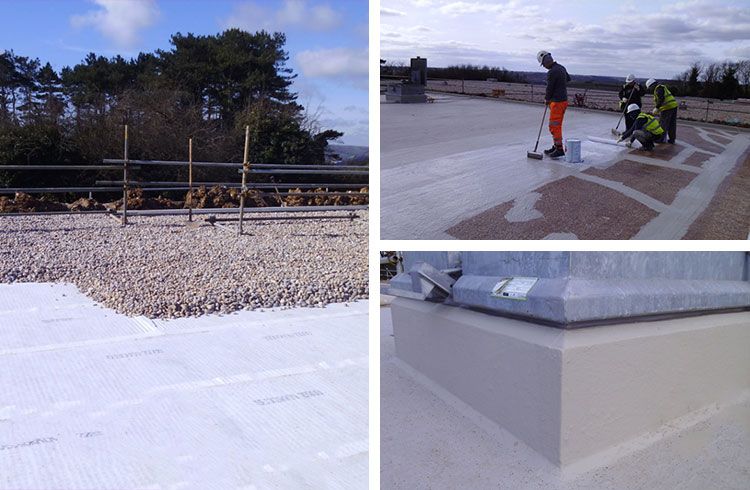 After all the repair works were carried out and cured, The Triflex Technical Team recommended priming the concrete with Triflex Cryl Primer 276, specifically designed for use on cementitious substrates and can be over-coated in 45 minutes.

To meet the waterproofing and surfacing needs, Triflex ProTect and Triflex ProDetail were specified. These fleece reinforced systems go hand in hand for main area waterproofing and the waterproofing of details. Both systems are based on the most advanced PMMA resin technology and have properties that when compared to other resins provide numerous benefits. They are rapid curing, allowing works to be treated quickly, have the ability to cure at low temperatures, so works can be completed all year round and both systems are UV and hydrolysis resistant and will not break down when exposed over long periods of time sun light or water.

With the project specification requiring the roof to installed with over 200 tonnes of 20-40 mm rounded aggregate the heavy duty variants of both systems were installed. Which incorporate an additional embedment layer above the waterproofing layer which consists of resin and quartz.