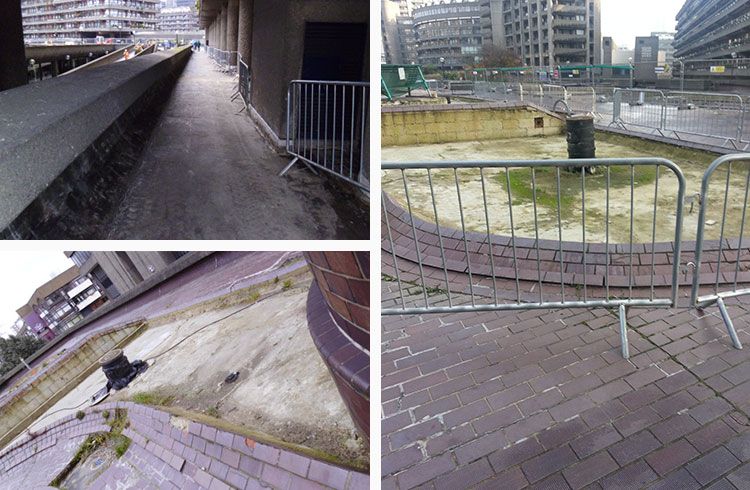 The Barbican estate located within the City of London is a prominent example of British architecture. Constructed between 1965 and 1976 following the area being heavily bombed during the Second World War. Today the estate is Grade II listed and is home to around 4,000 people living in 2,014 flats. It also houses the world-renowned Arts Centre, a school, a music college, various commercial premises, gardens and lakes.

The majority of the unique barrel vaulted roofs at the Barbican were waterproofed with Triflex ProTect with a white finish coat in the 1990’s. Based on the positive experience with the roofs, the client, the City of London Corporation and their consultants, Bickerdike Allen Architects contacted Triflex looking for a solution which would not only stop the ingress of water to occupied areas beneath the podium and terrace areas, but would be impact resistant enabling it to withstand the vast amount of pedestrian foot traffic. The solution would need to be in keeping with the current aesthetic of the area and comply with all listed building requirements. The project also required the waterproofing of two concrete water features.

The podium and terrace areas covered approximately 8,000m² with a brick slip tiled finish. Prior to any installation The Triflex Technical Team conducted numerous core tests to establish the entire build-up of the substrate, its condition, Triflex’s ability to adhere to it and to ascertain any preparation and priming requirements. The core testing to the main podium deck revealed that the build up from top down comprised of brick slip tiles, screed, Foamglas insulation, failed asphalt waterproofing and the existing structural slab. Based on the build-up it was deemed that the upper layers would need to be removed down to the asphalt.

Given its long-term performance on the project and its ability to wisthstand loads, Bickerdike Allen Architects specified the reinstatement of new Foamglas insulation so that the thermal properties would not be affected in the space below.

Phasing of the works and minimising disruption was also important given the large numbers of residents and general public trafficking the area. The client therefore needed a system that was versatile, ultra-fast curing and ultimately able to be overlaid and re-trafficked as quickly as possible, minimising inconvenience to users. Given the large areas, numerous expansion joints were discovered upon excavation of the site, all of which were treated with bespoke, CAD designed Triflex loop expansion joints. 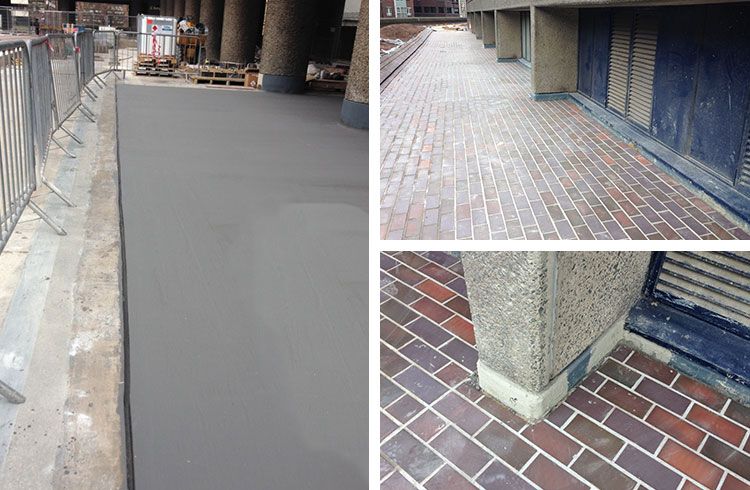 Triflex were specified to supply the waterproofing solution after carrying out several site demonstrations to the client. These demonstrations proved how easily the specified Triflex ProTect heavy duty waterproofing system adhered to the Foamglas insulation following the application of a primer / sealer and carrier membrane. The demonstrations also showed how The Triflex ProTect heavy duty variant would provide a robust, puncture resistant wearing layer with a key to adhere the screed and subsequent brick slip tiles.

Triflex Authorised Contracting Partners, VolkerLaser conducted the works and were able to assist the Technical Team with producing weekly progress reports to the City of London. This was essential in order to maintain strong communication links with all parties, ensured continuity of work, and kept the programme on schedule.

After VolkerLaser removed the brick slip tiles, screed and original foamglass insulation, the asphalt was overlaid with new Foamglas insulation board. Due to the open texture of the surface of the board, a primer and carrier membrane was applied prior to the Triflex ProTect heavy duty waterproofing.

Triflex ProTect is commonly used above various insulation media including Foamglas in warm roof build ups. The system’s compatibility with over 7,000 substrates allowed interfaces to be created with various details including glazing.

The Triflex ProTect system is rapid curing and can be re-opened to traffic in as little as 1 hour allowing the screed and brick slip tiles to be rapidly reinstated. The system is also easy to install and can be installed at temperatures down to 0°C allowing works to be completed rapidly, all year round with minimal disruption. The system incorporates a high tensile fleece reinforcement which helps to accommodate high levels of movement and cracking within the structure and between substrates with different coefficients of expansion.

Once the system was fully cured, it was overlaid with screed and brick slip tiles incorporating the movement joints, as detailed in the CAD drawings.

Triflex ProTect was also used to waterproof the water features. Unlike many other waterproofing systems, Triflex ProTect is hydrolysis resistant meaning that it won’t break down when permanently submerged in water over long periods of time.
The Triflex technical team provided extensive on-site support, this helped to maintain the quality of work and supported the phasing. Thanks to the speed of cure and the versatility of Triflex ProTect, the renovations were completed quickly and re-opened to the public as soon as possible, minimising disruption. 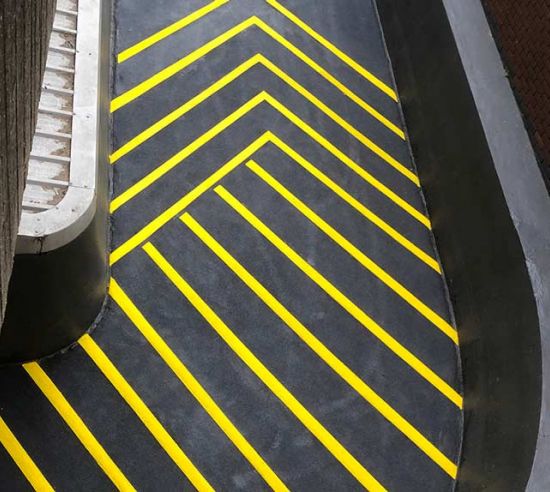 Prestigious horse stables ramps
Since 2013 Triflex has been providing both fully and partially reinforced waterproofing and surfacing solutions to a highly prestigious stables which is world renowned for their horses and riding arena. 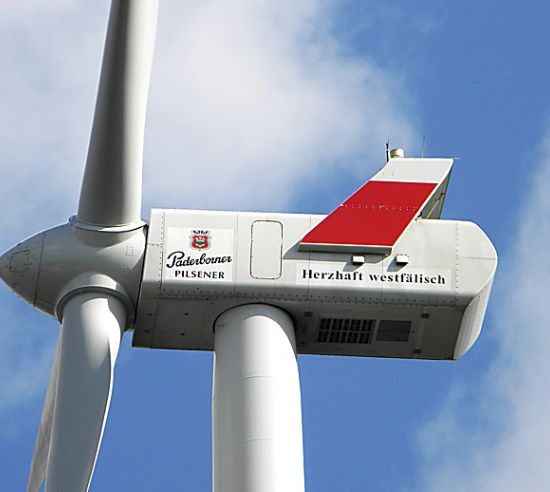 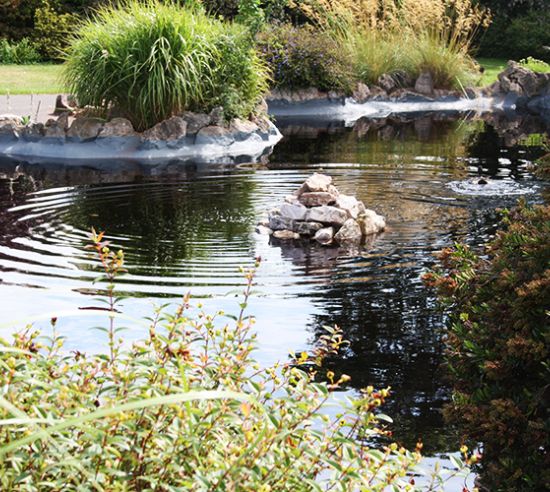 Abbey gardens duck pond
Located in a prominent position on Torquay sea front, the duck pond in Abbey gardens had issues with leaking for more than 5 years. 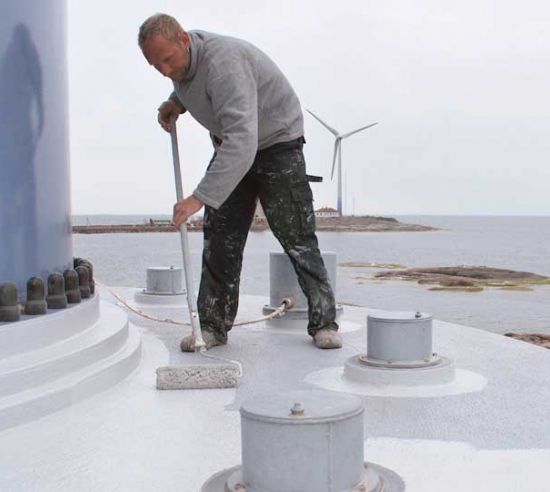